Chat with us, powered by LiveChat
Get a Quote

New technique works 100 times faster than conventional 3D printing and makes objects within minutes by simply lifting them out of a pool of resin. 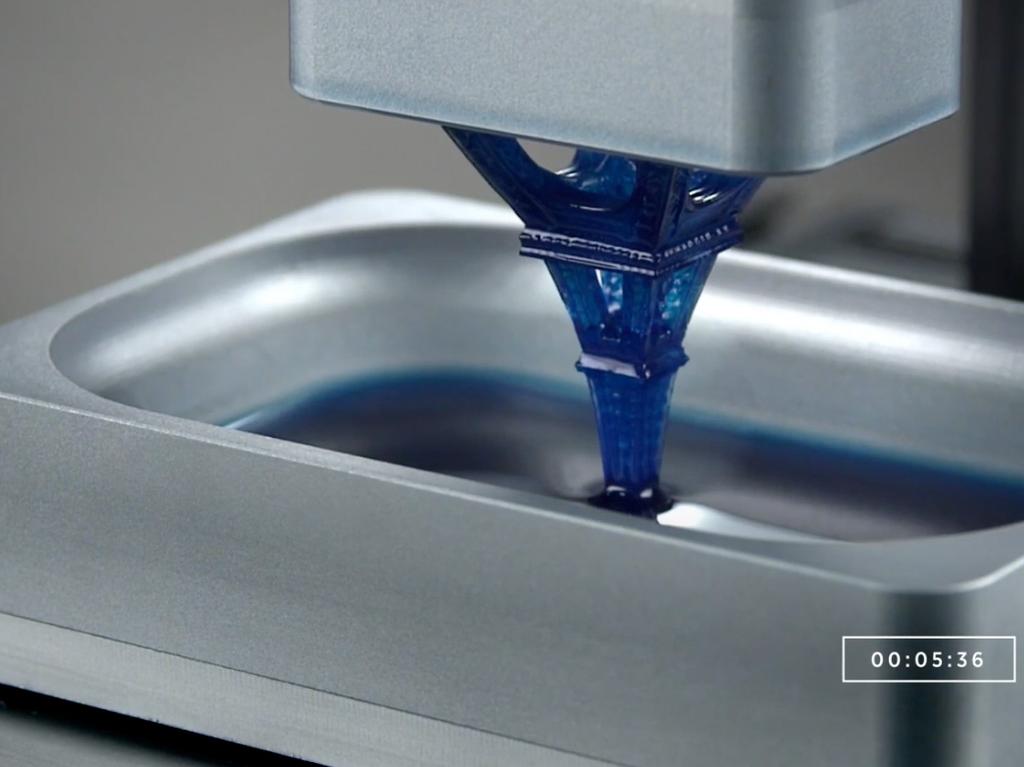 Scientists have created a Terminator 2-inspired 3D printer that lifts objects fully formed from a pool of goo in a matter of minutes.

The technique, which could transform 3D printing, works up to 100 times faster than current methods and produces objects that are considerably stronger.

And if the machine looks like the product of a science fiction author’s imagination, it may be because its inventors were inspired by the killer robot, T-1000, that rises menacingly from a puddle of molten metal in the film.

“We were inspired by the Terminator 2 scene,” said Joseph DeSimone, a professor of chemistry at University of North Carolina and a founder of the company,Carbon3D.

“Why couldn’t you have an object rise out of a puddle in real time with essentially no waste?”

The new technique, called continuous liquid interface production (Clip), features a moving platform that lifts printed objects gently out of a reservoir of liquid resin. The technique combines pulses of light, which solidify the resin, and oxygen, which prevents it from solidifying, to craft intricate three-dimensional objects.

Crucially, it works continually, unlike current printers that construct objects by building layer upon layer.

“3D printing is actually a misnomer; it is actually 2D printing over and over again,” DeSimone said. “There are mushrooms that grow faster than 3D printed parts.”

In a demonstration, it took the Clip printer seven minutes to produce a hollow geometric ball – a task which would have taken about 10 hours with a conventional 3D printer.

In a study, published on Thursday in the journal Science, DeSimone and colleagues describe how their technique combines the manipulation of oxygen and light.

At the base of the liquid resin reservoir, is an oxygen permeable window – similar to a contact lens – which leads to an oxygen rich “dead zone”, less than 1mm thick, at the bottom of the tank.

Oxygen stops the resin from solidifying, even when light is projected through it, meaning that the solidification happens just above the dead zone.

The precise shape that solidifies is controlled by light projections through the permeable window. Since the liquid layer is always present beneath the slowly-forming object, there is no need to wait for new resin to flow in and the object can be pulled upwards steadily.

The continuity of the process also means that Clip produces much stronger objects than the slate-like structure of objects printed in layers, which can be sturdy in one direction, but will shatter under force in the other.

The 3D-printed gun may have made the headlines, but it would have been useless at withstanding an explosion in practice.

Jonathan Rowley, of Digits2Widgets, a 3D printing company in London, said the strength factor was even more impressive than the new technique’s speed.

“At the moment most 3D printers produce crap slowly and I don’t need crap fast.

“If you add the speed of this technology to the extra strength it provides it means you could produce parts that start to compete with traditional manufacturing. It’s probably something of a big deal.”

We recommend that you not send native cad files because we may not always have the same version of software. In this case, we will have to request STP files for conversion in order to proceed with the quote.

Select the process and material you would like your parts to be quoted in. If there are multiple processes or materials, please include this information next to the file names in the email. If you would to see a list of material and services we offer, please Click Here

If you have any questions about our rapid prototyping or manufacturing services, please include them in the email. One of our specialists will promptly reply and will be able to assist you with any technical questions or requests.

Additive Manufacturing LLC was created from a desire to offer outstanding customer service while providing our customers with experienced and technical part feedback and creation. With over 25 years of conventional and advanced additive manufacturing industry experience, our customers get the answers they need to help bridge the knowledge gap between new and traditional manufacturing technologies. After the manufacturing solution has been established, we use the optimal metal or plastic technology to create the best part on time.